Trending
By LynchburgLiving on January 1, 2019 Features, This City

The intermission is over, and The historic Academy of Music’s story picks up where it left off more than 60 years ago.

The first time Clifton Potter saw a woman sawed in half was at Lynchburg’s Academy of Music. As a child in the 1940s and ’50s, Potter spent many Saturdays there watching western movies on the silver screen. It was there, too, that he witnessed the magical marvel.

“I remember seeing a magician,” Potter, a longtime history professor at University of Lynchburg, told the Lynchburg News & Advance in 2015. “The first time I ever saw anyone sawed in half was at the Academy, which was kind of wonderful.”

In 1958, the Academy closed its doors and the magic ended. Urban sprawl and the popularity of television spelled the end for the Academy and other downtown theaters—the Paramount, Isis, Warner and a half-dozen others.

But in December of 2018, after 60 years, the marquee lights were illuminated again. Reborn as part of the Academy Center of the Arts, the Beaux-Arts–style theater was once again ready for magic. 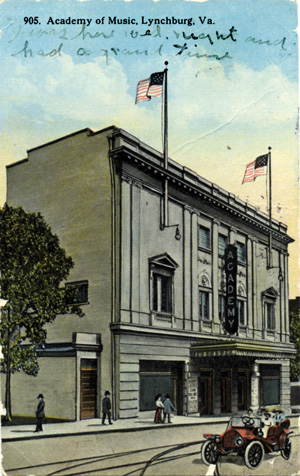 The Beginning
The Academy of Music first opened its doors on February 1, 1905, on the site of an old tobacco warehouse at the corner of Main and Sixth streets.

It was largely the brainchild of Richard Apperson, president of a local streetcar and electricity company. He and about two dozen business partners purchased the old warehouse and within seven months, on February 1, 1905, the Academy of Music was open for business.
Lynchburg’s morning newspaper, The News, reported that about 800 people attended the opening night festivities, which included the musical comedy “The Show Girl,” starring vaudeville actress Stella Mayhew.

In a front-page article the following morning, The News called it an “auspicious occasion” attended by “a notable and representative assemblage of Lynchburg people.” Those who attended were not only “notable,” but reasonably affluent. The Baltimore Sun reported that those attending the opening night show paid $10 a seat—more than $280 today. 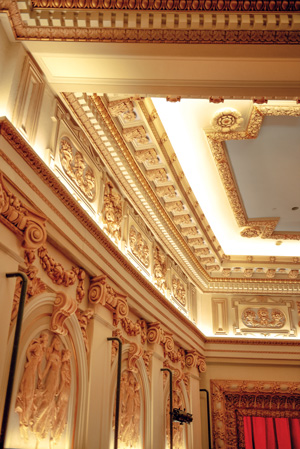 According to The News, the Academy cost $45,000 to build—almost $1.3 million today. “Nothing has been spared to make the play-house a dream of beauty on the inside, while the exterior compares favorably with any other theatre in the State,” the paper reported, adding, “It must be seen to be appreciated.”

The News praised the theater for its “comfortable” seating and said there wasn’t a bad seat in the house. Fire safety, a common concern at a time when the words “theater” and “fire” graced many a newspaper headline, also was addressed.

“The stage is equipped with an asbestos curtain, which will be in use at all times, except when the other scenery is set for use during a play,” The News reported. “This curtain is hung on wires and cables, and will be so that it can be lowered instantly, should there be an occasion to protect the audience from a fire among the stage settings.

“There are fifteen exits in all portions of the main building, through which a large audience could quickly empty itself in cases of fire or panic. The balcony and gallery have ready access to fire escapes on both sides of the structure.” 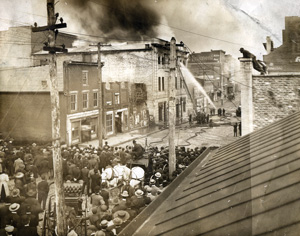 The Fire
On April 20, 1911, a fire broke out at the Academy, presumably in resident manager Corbin Shield’s apartment. Under the headline, “Narrow Escapes in Theatre Fire,” the Richmond Times Dispatch reported that the Academy was “destroyed by fire … with a loss of $50,000.”

The writer went on to say that Shield and his family safely “made their escape through dense smoke and in scanty attire.” Two others weren’t so lucky.
While fighting the fire, a “hoseman” with Company No. 1 was “overcome with smoke and had to be carried from the building by two fellow firemen.”
While surveying the damage, Arthur T. Powell, the Academy’s vice president, fell through the floor, “dropping twenty feet into burned and twisted debris.” Powell suffered multiple fractures and a bruised hip, but at press time was expected to recover.

After the fire, some debated about whether to rebuild the Academy. The Times Dispatch reported in July of 1911 that rebuilding was “a question that is uppermost in the mind of the theatre-goer of the city, but at present there seems to be no way to restore the playhouse.”

But rebuild they did, thanks again to determined local investors, among them prominent merchant Charles Guggenheimer. This time, architect C.K. Howell, who designed theaters all over the South in the early 1900s, transformed the Academy into a Beaux-Arts showplace.
It reopened in December of 1912. 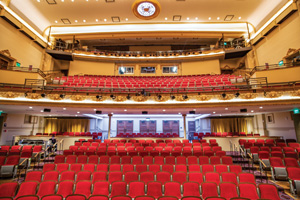 Ms. Boonie
In its early days, the Academy hosted an A-list of performers, among them concert violinist Efrem Zimbalist Sr., actors Douglas Fairbanks and Ethel Barrymore, cowboy-humorist Will Rogers, and W.C. Handy, the “Father of the Blues.”

It presented vaudeville shows and lectures, and Floyd Ward, who taught generations of Lynchburg children to dance, held her annual revues at the Academy. The theater also screened silent movies and, starting in the late 1920s, “talkies.”

Because the Academy operated at the height of the Jim Crow era, though, African Americans had to enjoy these events from nearly atop the rafters. African Americans entered through a side door and sat in a segregated balcony.

It was from a tiny booth outside this balcony that a woman named Lottie Payne Stratton made Saturday mornings magical for many of Lynchburg’s African American children.

For 30 years, Stratton, an African American herself, was the cashier for the segregated balcony. Somewhere along the way, she started letting children in for free. Stratton, who the neighborhood kids called “Ms. Boonie,” didn’t have children of her own.

Perhaps it was kindness and a mothering instinct that led her to smuggle children into the theater. Perhaps it was civil disobedience. Regardless of the reason, when restoration of the Academy’s historic theater began in earnest a few years ago, Stratton’s ticket booth was preserved as a sacred space.

“Everyone knew that it was a special part of the Academy’s history,” lead architect Amanda Adams, of local architecture firm CJMW, said. “It’s rare for it to be intact. Most of that [sort of thing]disappears as theaters evolve.”

The Academy’s opening week of events celebrated the full integration of the theater. It started with a sold-out concert, featuring gospel legend Mavis Staples, blues artist Devon Gilfillian, and the Diamond Hill Baptist Church choirs. It concluded with a black-tie affair with Wynton Marsalis.

Also, awards also were given to people who had contributed to Lynchburg’s art and culture scene. One was named for Stratton, who passed away in 1965. 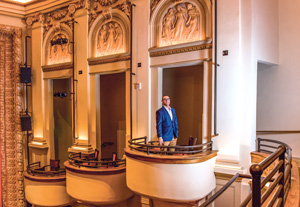 The Phoenix
After the theater closed its doors in 1958, there were numerous attempts to save it. In the 1960s, the Friends of the Academy of Music saved it from the wrecking ball.

In 1969, it became the first structure in Lynchburg to be listed on the National Register of Historic Places. The hope was that the designation would make the Academy eligible for federal grants and lead to its restoration.

In the 1990s, after a windstorm destroyed the theater’s fly tower, there was another surge of activity. Geoff Kershner, executive director of the Academy Center of the Arts since 2015, remembers visiting the Academy with his father around that time.

“My father was involved in some of the early efforts to save the theater,” Kershner said. “He’d gone there to see the theater with a couple of other community members. He took me along because he thought it would be interesting to see.

“I remember going in with him. I don’t remember how old I was. We went in with flashlights. It’s a little surreal. As a kid, it was interesting and clearly stayed in my memory, but I had no clue as to how much it would be attached to my adult life.”

In the early 2000s, after what remained of the Academy of Music organization combined with Lynchburg’s Fine Arts Center, a restoration effort started to gain momentum. “There was a leadership team, community leaders and philanthropists who had really, behind the scenes, made a decision to push this rock up the hill,” Kershner said.

“They committed a fairly large amount of money, but that triggered the city having a belief that it was worth investing city funds as well. Then the city came in, along with the Economic Development Authority. … That was really a tipping point, along with a grassroots effort.”

When the Academy restoration was complete, Potter was one of the first people to see it. “[We] went down for the soft opening for those of us who had contributed, and dreams really do come true,” he said.

“It’s just amazing, more beautiful than I remembered it. It was like going into a theater in Vienna. It’s very Beaux-Arts. It’s like stepping back into 1912. It’s gorgeous. It’s just amazing…