Before Patrick Ellis and Mitchell Bond bought their home in downtown Bedford, they had visions of living a more simplified and creative life that might tie in their seminary education. “We referred to it as ‘moving to Kansas’,” jokes Mitchell.

It all clicked during a Christmas visit to Montvale.

“We said, ‘Well, maybe this could be Kansas’,” recalls Mitchell, a Bedford native. After years of living and working in D.C. (Mitchell was a higher education administrator and Patrick was an educator), the two made the move to Bedford with the idea of purchasing a frame shop in town and also using it to hold artist retreats.

Their plan took a different course when Mitchell and Patrick announced their plans to show local art. “Folks showed up out of the woodwork,” Mitchell explains. They purchased a larger building on Court Street in order to support the needs and interests of the growing Bedford creative community. Goose Creek Studio—their custom framing business—emphasizes work by area artists and houses artists’ workshops.

One could argue that their Victorian house is a gallery, too: more than 425 pieces of artwork hang from walls and shutters or sit on shelves and sills. Nearly every door finds itself adorned with art.

“To be honest, we’ve traded, bartered, or acquired most of what you see in here,” Mitchell points out. He and Patrick have personal connections to the artists and artisans behind each piece; Mitchell says it’s like “being surrounded by your friends.”

They are surrounded by friends here indeed, both in the flesh and by way of their original visual representations. Many attribute the creation of the Bedford Artisan Trail to Patrick and Mitchell. However, Mitchell indicates that the art and the creators were present long before he returned to his hometown. 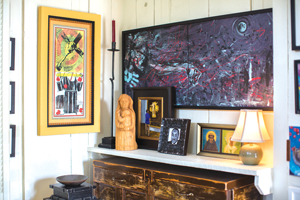 “We just brought a little organization and a little butt-kicking to the process to get people talking to each other and working together. Everything we do mission-wise, through the house and through the shop, is to get these folks together and make connections, so yes, we were part of the instigation for the artisan trail, but we didn’t build it; it was already here.”

At home, Patrick and Mitchell have a dedicated gallery for hosting select shows. A quiet, light-filled space that overlooks a garden, the walls are filled with their personal collection of artwork when not featuring art for a special show. “It’s all art that’s kind of at the intersection of faith and spirituality, and when we say spirituality we just don’t mean Christian,” Patrick says. Even the windows contribute to the chapel-like feel of this space—Patrick made the functional shutters in the shape of gothic church windows for that very reason. “We think all art has a spiritual component,” he explains.

The gallery neighbors the kitchen, a space that was used as a knitting classroom during one of the building’s former lives. Patrick and Mitchell transformed it into a functional kitchen by installing cabinets, countertops, a sink, and appliances. Form and function marry here, with pots suspended overhead for quick access and frequently used items occupying open shelves/shelving. The custom island features marble from Mitchell’s great aunt’s house, and Patrick built the rest of the island to go around it. A local artisan fashioned a settee from an old twin bed; the rest of the kitchen is furnished with yard sale finds and, of course, art. It’s not common to find so much artwork in a kitchen, but it’s also not out of place here since Patrick and Mitchell see walls as prime real estate—Patrick likes to joke that “the kitchen is really in need of a serious remodel, so we just hang lots of artwork on the wall so you don’t notice it!” One particularly eye-catching display includes a fun and quirky series of puns based on the Warhol soup cans made by George Wachob. Patrick points to one: “This is ‘vegetable beef,’ because the vegetables are fighting.”

While the property was otherwise move-in ready, another room on the main level underwent a different kind of transformation. Mitchell turned the sun-soaked dining room into his personal studio. “It didn’t make sense to have a dining room we never used when we both needed space to work,” Patrick points out. Here, Mitchell makes fused glass, stained glass, and mosaics. While they don’t walk around barefoot in this room, they do dine in here occasionally. The blue dining table was a gift from a customer; custom pottery by Nancy Blankenship serves as dinnerware. Paintings of their dogs (Simon, Luther, and Sidd) dress the doorway, and over the window hangs a board holding a series that depicts the O Antiphons, separated by washers to tie them together visually.

It is fitting to the property’s history that Patrick and Mitchell continue to conduct business there, through their studios, since it accommodated a series of businesses for more than 20 years. Patrick’s studio is adjacent to Mitchell’s. He possesses an undergraduate degree in art from the University of Georgia, and says his art has evolved over the years. “I was doing these studio things, and now I’m doing these constructions—found objects assemblages,” such as the totem poles flanking the Goose Creek parking lot. A prime piece in Patrick’s studio: a cabinet he built that features Mitchell’s mosaic work. Other works of art nod to different themes from religious literature: Adam and Eve are over a storage cabinet, and artist John Pfluger’s miniature animals live on a shelf under a verse from Genesis, done in graffiti art. 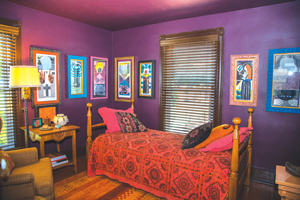 Step into the wide main hallway and find arched entryways, an original staircase, and a two-story foyer. Patrick confesses that one of the reasons he loves this house is because the foyer offers enough wall space for an oversized piece of artwork spread across three canvasses.

Upstairs is a cozy den and a warm, inviting guest room with eggplant-colored walls. “Our friend has a guest room she uses as a prayer room, and we wanted to create a space that was meditative,” says Patrick as he points out the hand-painted images of various saints. The end of the hallway leads to a room that a massage therapist used to rent back in the property’s more commercial days. “We joke that half of Bedford has been naked in this room!” Patrick laughs. Nowadays, it’s an eclectic, art-filled master bedroom complete with a full-length church pew and Mitchell’s collection of cookbooks (“I love to read cookbooks—better than a novel!” he admits).

The way out the back door reveals a lush garden comprised of perennials: rosemary, lavender, coneflowers, Russian sage, asters, butterfly weed, irises—all are at home here. Native stones from Montvale’s Goose Creek Valley and pottery from a friend provide added visual interest, with the back of the garden anchored by columns that once were part of the cupola at the Bedford County Courthouse. Patrick salvaged the columns during the cupola replacement. “They were put up there in 1946, and they were just going to throw them away,” he recalls. “I thought they were neat, just a cool little feature.”

A final “cool little feature” Patrick points out is a sign by the back porch that reads The Portiuncula Guild, a nod to St. Francis’ church in Assisi. “It means ‘the little portion’,” he explains. This is how he and Mitchell see their home, as well: a home that focuses on living simply, sharing work, and building community—and they are thankful for it. “We’ve been just amazed at what we’ve found in this area,” Patrick says. “You know, it’s just amazing.”

Charlotte Farley is a full-time freelance writer and editor. A native of Long Island, New York, she comes by her fondness for bagels and Billy Joel honestly.These days, Charlotte lives in Lynchburg and enjoys exploring Virginia with her husband and two children.