The Listening celebrated its fifth anniversary last March, but 2019 promises to be an even more noteworthy year for the arts advocacy nonprofit. This June, The Listening will launch Freedom School, a free six-week program for rising sixth-graders that aims to improve literacy during the summer through art, dance, spoken word, and theatre lessons. Lynchburg’s Freedom School will be held at Randolph College.

The Freedom School program is a national initiative created by the Children’s Defense Fund (CDF) and is rooted in the Mississippi Freedom Project of 1964. Lynchburg’s Freedom School will be the first in Central Virginia, and The Listening is ideally suited to pioneer the initiative locally. “Nicholas George [founder and executive director of The Listening]started The Listening as a way to affect lives through spoken word poetry, particularly as a mental health intervention for middle schoolers,” says the Reverend Dori Baker, Member at Large of The Listening’s Board of Directors. “Making poetry and performing poetry can help you move beyond isolation around your own pain, anxiety, and fear into a place of community.” 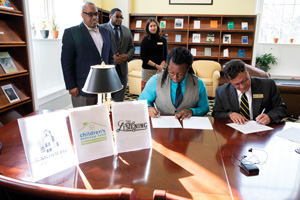 George, Baker, and the Reverend Dr. Keith Anderson began thinking about creating a Lynchburg Freedom School a couple of years ago, but the Charlottesville rally of August 2017 spurred the team to turn plans into reality quickly. “After white supremacists created a tragic moment in our neighboring town of Charlottesville, we looked at each other and said, ‘Now’s the time’,” Baker recalls. “‘People need a tangible way to express love in the face of this kind of hatred.’”
The first step in The Listening’s journey to build a Freedom School was a trip to Clinton, Tennessee, which is the home of CDF Haley Farm. The farm, which previously belonged to Roots author Alex Haley, is the site of the CDF’s annual Samuel DeWitt Proctor Institute for Child Advocacy.

“We had a week of being infused with the ethos of Freedom School and also learning the nuts and bolts,” Baker says. “We came back really inspired to do the fundraising and program planning. The three children who went were all middle schoolers. You can do Freedom School for third graders through high schoolers, but we had already zeroed in on middle school because that’s where The Listening’s sweet spot is. These middle schoolers came back so excited, singing the songs and doing the chants they had learned.”

Among the songs they learned was “Something So Strong,” a South African song of empowerment and resilience.

The lyrics include the phrase: “There’s something so strong inside of me; no matter what happens, I can take it, I can make it, I can be who I want to be.”

Additionally, a particular strength that Freedom School focuses on is the history of people who have had to overcome struggles throughout time.

The curriculum is about inclusion, tolerance, and the strength that comes from diversity.”

The Freedom School curriculum focuses on teaching to the whole child (instead of “to the test”) through activities that foster self-expression and meaningful communication with others. “The metrics of Freedom School are so inspiring,” Baker says. “They really do solve that summer reading loss problem, especially for boys. I see Freedom School having a positive influence on the public education system over time.”

Days at the Lynchburg Freedom School will run from 8 a.m. to 3:30 p.m. and will begin with breakfast and different guest readers from the community. 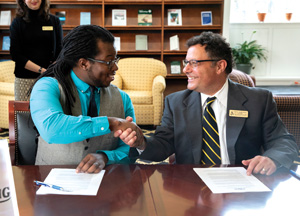 “It may be our mayor, our school board superintendent, a librarian, a custodian, or a barber who does a reading, tells the children a little bit about him or herself, and does a question-and-answer session,” Baker says. “The readings will end with a chant in which the children will thank the reader for taking the time to come and share. I know that every single person who comes in to be a guest reader is going to want to find a way to come back and help in some way because, in my experience, there are not enough opportunities out there for that kind of hands-on, tangible expression of love.”

After the guest reading, the 50 students selected to participate in Freedom School will come together for a time of gathering called “Harambe,” a Swahili word meaning “let’s pull together.”

Then, after lunch, community partners such as Old City Cemetery, the Legacy Museum, Endstation Theatre Company, Camp Kum-Ba-Yah, and HumanKind will work with The Listening to provide fun enrichment activities.

Student eligibility will be determined by recommendations from fifth grade teachers and guidance counselors, and recruitment will take place in March and April.

“We hope to be able to prioritize kids who come from our two most impoverished neighborhoods,” Baker notes.

“We believe this can be an intervention in generational poverty. Dr. Elizabeth Perry-Sizemore, who is a professor of economics at Randolph College, and her research assistants are identifying the places by census zone in Lynchburg that have the highest poverty rate, and we are going to really emphasize recruitment from those two neighborhoods.” The Freedom School staff will consist of a program director, site coordinator, and six servant leader interns.

Baker hopes that Lynchburg’s Freedom School will serve as an example for future Freedom Schools throughout Central Virginia, and she is confident that future isn’t too far away.

Emily Hedrick is a freelance writer, youth services librarian specializing in tween programming at the Lynchburg Public Library, and self-proclaimed geek. She is a huge fan of Harry Potter and “Game of Thrones,” and she enjoys reading, gaming, and spending time with her husband, friends, and family.