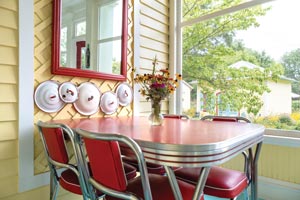 For fans of the I Spy children’s books—their pages packed full of colorful displays for young eyes to study and discover—Terry Foster’s historic Bedford home is a shrine to the popular ’90s series. “I love the idea of making your house so visually interesting,” Foster says. “It’s like a collage. You get to play around in every room.”

By combining her love for those paperback treasure hunts with her love of all things ’40s, ’50s and ’60s, Foster has created her own unique style that she loves sharing on social media as “Whimsybopper”: “I had a friend tell me… ‘It looks like Dr. Seuss and Willy Wonka decorated your house.’ That was the biggest compliment!”

It’s silly, yet meaningful—with whimsical details that are always rooted by nostalgic treasures.

The Foster family hasn’t always had roots, themselves. Since marrying her Marine husband 30 years ago, they have moved 12 times. After he retired from service about 10 years ago, they were excited to look for a place they could buy… and stay put. But where?

Terry and her husband had lived in Northern Virginia at one point and agreed it was the most beautiful state they had called home. So, naturally, she did what any 21st-century person does to figure something out—she Googled it. “With Virginia, I also typed in ‘college towns, destination places, main streets, antiquing.’ Bedford was the top result,” she explains.

They made an appointment with a realtor, explaining the rest of their wish list: “an old house on land.” It only took a month before they were the proud owners of a 5,000-square-foot home, built sometime in the 1870s.

After settling in, Terry immediately focused on transforming the traditional kitchen from a dark space with cherry cabinets into a bright, quirky diner. “The kitchen is my most colorful room. And the most-used room, too,” she says.

She painted the walls celery green—a color she had used before because “it’s not too minty”—and the cabinets white, leaving the doors removed to show off her large collection of cheerful glass bowls. “[That collection] started because I wanted to find a yellow one. I have a memory of my grandmother cooking using a bowl like that and the smell of dough rising. It’s just a warm fuzzy feeling for me,” Terry says. 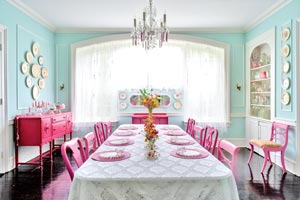 If you don’t feel the ’50s vibe from the pops of yellow, red, and blue in her other numerous kitchen collections (ice crushers, canisters, clocks… to name a few) just look down and the black and white checkered tile floor ties it all in. While Terry and her husband added this to the kitchen, it was already in place in other parts of the home including the downstairs hallway and foyer.

Just off the kitchen is an area of the home that’s gone by the wayside over time—the butler’s pantry. Terry painted those cabinets white as well, and uses the shelving to display her vintage thermos and picnic basket collections—they are among her favorites. “This location is perfect for these because it doesn’t get much sunlight. Anything you really treasure that’s old can’t be exposed to direct sunlight or it will fade,” she explains.

Another fun collection of antique toy irons hangs next to an old-fashioned utility sink.

Just when you think you’ve figured out Terry’s style, you enter the dining room. Here, a completely different type of “silly” takes center stage. “I didn’t want [this room]to be stuffy and formal. I love the Mad Hatter… I love the goofiness of that [story],” she says.

You can imagine yourself sitting down to a quirky tea party at the long dining table—it’s the first dining table the Fosters have ever owned. Terry collected the chairs over time and painted them pink to contrast against the light blue walls (Vintage Map by Martha Stewart). The gorgeous crystal chandelier was already hanging overhead—but of course Terry added her “whimsy” with some pink accents.

With no previous collection in mind for the dining room, Terry decided to start slowly gathering antique plates to display on the walls and over the fireplace. Other various dishes, cups, bowls and platters fill the built-in shelves. “I sort of have this obsession… I feel like I’m rescuing dishes if I see them at the thrift store. ‘Oh, a punch bowl! Can you imagine all of the weddings and parties this punch bowl saw and now it’s at a thrift store for $2.99.?’,” Terry jokes.

In the living room (also referred to as “the library” due to its four built-in shelves) you leave the pastel paradise behind and return to the yellow, red and blue found in the kitchen—but the overall tone is more calming. Crocheted afghans lure you into the seating area. 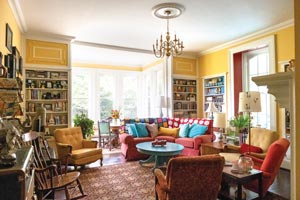 Terry’s eccentric spirit is just as strong in this room, in more subtle ways. A collection of vintage suitcases is stacked up to the ceiling against one wall. By the fireplace, a basket of hands (glove forms) makes you do a double take.

There are also items that bring tears to Terry’s eyes. Fishing lures in a jar and a restored toy truck were her father’s. He passed away seven years ago from a heart attack. “It hit all of us really hard. Just two months prior he had been given a good bill of health,” Terry recalls. “Around then I started thinking, ‘What am I holding back that I might regret?’ I had always wanted to be an artist, so I started drawing.”

When her kids were little, Terry would doodle designs or Bible verses for them to color. She took that idea and started designing and selling Christian coloring book downloads through her Doodle All Day online shop (abbreviated D.A.D.—for her dad).

She gets all of that work done in her studio—which is also a play room of sorts: “This is usually everyone’s favorite room. Maybe because it reminds them of being a kid.”

Dozens of board games—many of them antiques—fill one corner of the room; a Chinese checkers collection is displayed along the top of one wall. Her floor to ceiling “I Spy” shelves are a kid’s dream come true. In every nook and cranny, there are fun characters that will take you back to your favorite childhood memories.

With plenty of natural light, this is the perfect place to create. Terry usually spends time at her drawing desk “in the heat of summer and a lot more during the winter.” That’s because during the warm weather months, she is outside doing yard work or tending to her “I Spy” garden. This shady path leads visitors on a scavenger hunt. She loves having children of all ages visit and even creates checklists of items for them to find. 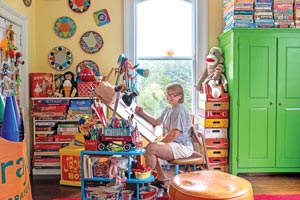 “I pinch myself sometimes, do I really get to live here?” Terry says. “This is so fun!”

Life at the Foster house is fun—and Terry’s playful spirit makes it that way. Of course, she knows the bright colors and silly collections aren’t everyone’s cup of tea: “I know it will be a hard sell some day.”

But after spending three decades house hopping, she isn’t worried about that just yet.

“I don’t want to neutralize my style for the next person. Because I am living here now,” Terry says. “This home truly brings me joy.”