Trending
By Kaye Moomaw on March 1, 2020 Departments, This City 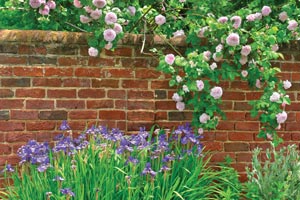 With over 700 roses for sale, the Old City Cemetery Antique Rose Festival (April 25 – May 31) is currently the largest public rose sale in the Mid-Atlantic region. As the festival enters its 25th year, organizers estimate approximately 3,000 people will visit to enjoy the roses at their peak of bloom.

The founding of the festival can be traced back to 1985 and the late Lynchburg resident Carl Cato, who founded the Heritage Rose Group in 1975 and had become quite noteworthy in rose circles. Jane White, the driving force behind the revitalization of Old City Cemetery, met Cato and knew he was just the man who could help her breathe life back into Lynchburg’s “grave garden.”

They started with “The Old Brick Wall”—the 800-foot remains of the cemetery’s 1860s brick boundary wall—where Cato suggested they tell the story of the history of roses in chronological order. Cato got busy formulating his planting plan. His original antique rose collection was planted in 1986 along the old brick wall. The first 60 varieties planted represented rose history from before 1581 through the 19th century.

Meanwhile, Jane White had other dreams—and her wheels really started turning after a trip with a couple of friends to the William Paca House and Garden in Annapolis, Maryland. “They were having the loveliest perennial plant sale where they served rose petal punch and rose petal tea sandwiches. We thoroughly enjoyed ourselves!” White recalls. On the drive home, the trio was convinced they could do something similar with much success at Old City Cemetery. They shared the idea with Cato, who suggested they make it a “rose cutting” sale—and, so they did.

In the very early days, the roses were all ordered in and they weren’t more than two inches tall. “To look at them you’d wonder if they would survive,” she said. “We had to fluff them up to make them look like anything.” 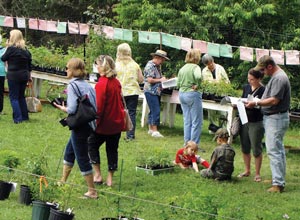 There were other challenges as well—from the logistics of setting up the sale to organizing the large number of volunteers. “[One of the volunteers] was good at putting up clotheslines and thought that would be a good way to hang up the signs that describe the roses we were selling. With a little practice, we came up with what I think is a pretty good system,” White said.

The festival occurs during the height of bloom yet still in time for roses to be planted before the really hot summer temperatures set in. The roses are started locally at Irvington Spring Farm so they are acclimatized and are more established. The majority of roses for sale today have been started from cuttings from the roses on the grounds. “They look so much better now than they ever did,” White said.

During the month of the sale, people travel from far and wide to shop for roses. Often, rose collectors will have their list in hand as so many of these roses are rare and not available on the market. On opening day, you’ll find a line that extends several blocks as these collectors try to find what they are looking for. 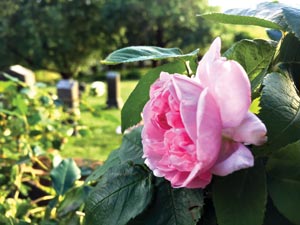 Volunteer rose enthusiasts are on hand to help people make their selections. Carolyn Bell has been a faithful “rose educator” during 15 of the 25 festivals. “I thoroughly enjoy the pleasure of taking a customer from a vague, uncertain starting point, where all they can think of saying is they want ‘something that smells good’ or ‘something they can’t kill’ to finding a rose or roses they’re excited to take home,” Bell explained.

Bruce Christian, former executive director and rose devotee, agrees. “It’s fun to match a person to a species based on maybe three or four wants that person has,” he explained. “Besides, I cannot count the number of people who come looking for something in particular and leave thrilled to have something they might never have considered.”

There is no stereotypical rose admirer. Their reasons for coming to the festival are so different—from young couples looking for something pretty at their new home to those looking for a rose whose color and fragrance reminds them of their mother or grandmother. Bell recalls, “a burly Marine, wearing a baseball cap and a tank top, covered in tattoos, who obviously loved roses and knew a lot about growing them.” At another sale, she recalled speaking to a woman who was choosing a rose to plant at the gravestone of her brother, a service member who had recently died in action. 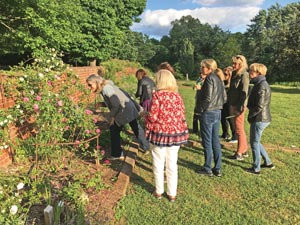 Now, 25 years later, Old City Cemetery is diversifying offerings available at the sale. Additional roses have been ordered from various sources around the United States. They are selected based on their American Rose Society designation for disease resistance, hardiness and beauty as well as the function they play in the landscape. There are roses that will grow well in pots as well as climbers that will cover a wall.

The sale helps to raise funds for the care of the roses grown on the property. “What Old City Cemetery does a great job of doing is telling the stories of these antique roses and providing a source for them,” said Christian. “I find the tours open people’s eyes to both history and the chance to see and smell up close, putting a face, scent, and touch to ‘the exotic’.”

The cemetery operates under the belief that the more people know about and appreciate these old garden roses the better their chance of long-term survival. “Giving the tours of the roses during the festival adds so much to the people’s experience. Carl Cato’s goal in life was to save these old roses,” White said. “By getting them into the hands of the people we are not only preserving the rose for us, but we’re saving them so they are not lost and forgotten way into the future.” 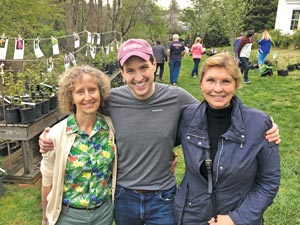 Traditionally, roses and cemeteries go hand in hand. Cemeteries are a natural place to find many old rose varieties due to the tradition of families bringing a “slip” from a rose at their home and planting them in the family’s burial plot.

Roses have been used in art as symbols of the resurrection for centuries. During both the pre-Victorian and the Victorian eras, roses were carved as symbols on tombstones that told people passing by about who was “sleeping” there. For example, an unopened rosebud was used on an infant or a very young child’s stone to symbolize the start of life that was cut short. A fully open bloom with a severed stem signifies an adult whose death was sudden and unexpected.

When you come to see the blooming roses during the Rose Festival, you can find some of these stone carvings for yourself.