Trending
By Drew Menard on September 1, 2018 This City

While Grassroots Local Market is a co-op, dedicated to adding value to the community beyond the product on its shelves, as far as shoppers are concerned it operates like a “regular” grocery store.

“The bottom line is this is a grocery store,” said Kate Jenkins, GLM Outreach Coordinator. “No one is going to choose your groceries for you or just give you a box of food where you don’t know what you are getting.”

The grocery store opened to the public on September 1; it has produce, milk, frozen entrees, and grab-and-go options, including self-serve coffee, soup, and sandwiches.

Common misunderstandings about co-ops are that they are always for members only—which is not true—and that one has to work there or provide some sort of labor for the store in order to shop there—also false.

“Co-ops are really just a reflection of the community that owns them,” Sheppard explained.

Each co-op is unique to the community it’s in, but generally they operate under seven basic principles that include concern for the community, open, voluntary membership, and democratic member control. Membership is open to anyone (for a one-time, $200 payment or a payment plan of $50 up front and five monthly installments of $30) and is refundable.

“Once you purchase a membership you become a co-owner of the grocery store,” Jenkins said. “You are purchasing one equal stock and that gives you one equal vote.” 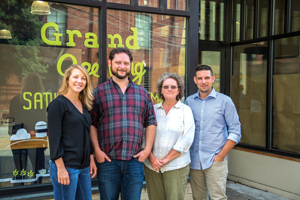 So, rather than a national retail chain making decisions about what is best for your local grocery store, you, as a member-owner, get a say.

“It’s a way for community members to take action and be involved,” Jenkins said. “But they don’t have to contribute a large amount of time and money or resources to be a key member. … A co-op essentially serves as a gathering place for those (member-owner) community members. The goal behind the membership is to have an equal yet very diverse representation of the community that we serve.”

Co-ops run as a pure democracy—one vote per member. While individuals may purchase multiple memberships, that does not buy a weighted vote or more power; it’s functionally a donation. Multiple people within one household may purchase a membership, and with it the right to vote, individually. And members don’t weigh in on every trivial matter of the store, such as what brands of beans are stocked. Members certainly can offer feedback, but business decisions are handled by the general manager, who is hired and held accountable by an elected board of directors. Any member is eligible to run for the board, currently seven members (up to 11 may be elected) who serve voluntarily with term limits.

“Equality and equity are founding principles of a co-op,” Sheppard said.

“It really brings access to market for farmers,” Jenkins said. “I come from a long line of farmers. Farmers markets are great but the maker or the grower has to stop what they are doing, load up their goods, travel to a farmers market. [The store] provides them the ability to source their goods in another location and keep a roof over their heads.”

The co-op does support, and has the support of, area farmers markets, including the Lynchburg Community Market. Grassroots aims to build up, not undercut, the downtown local economy.

“The goal is to source as many items locally as possible,” Jenkins said. For the items that are imported, “it will be done in a mindful way.”

An advantage of co-ops is not just that they are customized to their community—focused on bringing as much local product to the shelves as is feasible—but that they are invested in it as well.

“We are a for-profit enterprise,” Jenkins clarified. “At the end of the day, we are a grocery store that is a for-profit business. The difference with cooperatives versus publicly traded companies and different types of enterprises is that surplus at the end of the year is either invested back into the store or equitably allocated back to the membership in the form of a patronage rebate. It incentivizes a member to shop here versus somewhere else.”

But profits are also going to go toward education. Grassroots is committed to bringing fresh, healthy food downtown and, likewise, the co-op is on a mission to bring knowledge on sustainable business practices, fair trade, where our food comes from, and healthy eating and cooking to help foster a culture of more mindful shoppers.

“It really is about sourcing local food, making it available for local people and then keeping the money local,” Jenkins said, noting the co-op’s commitment to supporting other local businesses. That way, she continued, Grassroots can help Lynchburg “build up our community for a stronger generation.”

How It Came To Be

Local shakers David Poole and Dan Hague, both current board members, co-own the building at 1300 Main Street, where Grassroots is housed. A survey from Virginia Tech noted that downtown Lynchburg is the largest urban food desert in the commonwealth. Combined with feedback from locals expressing a desire for a downtown grocer, they knew the space could fill a need.

“We wanted to see a grocery downtown,” Hague said, “but could not attract a commercial enterprise that was interested in doing it. We looked at the survey results for downtown. The No. 1 requested service was always a grocery store.”

The only viable option became a cooperative venture.

“A co-op is a way for a community to further its wants and needs in a sensible fashion,” Poole said. “It’s a load-sharing, risk-sharing, cost-sharing—it’s a way to get what a community wants. The sustainability and the aspects of good food fit in so well with that. They are not necessarily easy ones to sell in the standard world of commerce. It brings all those things together quite well.”

“We figured if the community wants a grocery store then maybe they would like to do it themselves,” Hague added.

A steering committee was formed and began spreading the idea among local groups and individuals. In 2016 they started selling memberships and raised more than $175,000 through those efforts in about a year and a half.

“It was really a leap of faith for those early adopters to get on board with the co-op,” Poole said.

Last November, the Lynchburg Economic Development Authority awarded Grassroots a $180,000 loan, which was vital in getting construction underway.

And a cooperative grocery store fits right in with the downtown culture that is carving out its individual identity.

“Co-ops are very adaptable to their environment,” Poole said. “The co-op that we opened may be very different in a couple years to even what we could imagine because of the community and the ownership.”

For Sheppard, co-ops are more than a fun experiment in community governance. He’s worked with co-ops for the past seven years, starting in Ohio and then Massachusetts, because he sees them as a way to inject goodwill into a local economy.

“On an ideological level,” he said, “I personally think conventional big business models cause a lot of harm in the world for the sake of short-term gains. I see the cooperative model as a solution to that problem.”

“It has to be a win-win,” Poole added. “The corporate philosophy of ‘win at all costs’ does not work when you are trying to revitalize a downtown and bring heart and soul back to a community. That is where a co-op can shine.”

Drew Menard is a professional writer living in Central Virginia with his wife and four active boys. He earned a bachelor's degree in journalism and a master's in strategic communication, publishing his thesis on the emergent trend of transmedia storytelling. Drew is an award-winning columnist who has written extensively for magazines, newspapers, and digital publications. His creative projects also include developing screenplays and novels. Drew's first book, "Congo Sole" (Morgan James Publishing, 2019), tells the inspiring true story of a war refugee turned humanitarian.