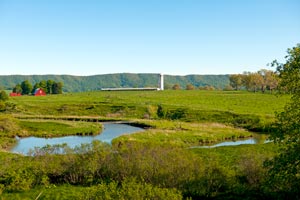 A trip to Burke’s Garden is a trip back in time. Located in remote Tazewell County in Southwest Virginia, this farming community includes 14 Amish families who still rely on horse and buggies and foot-powered scooters for transportation.

Before you enter the valley, you are encouraged to get gas at the intersection of Virginia routes 61 and 623, where old-fashioned pumps require motorists to pay inside. There are no gas stations, or even stoplights, in Burke’s Garden. Route 623 winds through deciduous forests on the north side of Garden Mountain and is the only paved road into the valley. (If you come in the gravel road from the south, it’s suggested you bring a chainsaw.)

The name Burke’s Garden conjures a fertile place full of flowers and vegetables, and while there are some big gardens and a greenhouse, this unique spot in Southwest Virginia is mostly a cattle-farming community.

Vast fields for grazing extend as far as the eye can see when viewed from the southwestern rim of this valley, often called “God’s Thumbprint.” The valley is circled by Garden Mountain and sits 3,100 feet above sea level, making it the highest valley in the state. 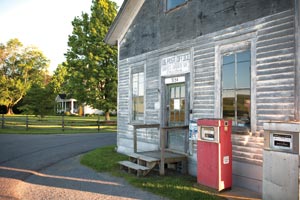 My husband and I hiked the 1.5-mile section on the Appalachian Trail to Chestnut Knob for a spectacular view of the valley. The AT continues along the spine of Garden Mountain on its southern rim. The mountains around it rise to 4,408 feet on the ridge of Beartown Wilderness.

The oval, bowl-like valley was once the bed of an ancient sea. About 8.5 miles long and four miles wide, the valley resembles a large volcanic crater, but it was actually formed when underground limestone caverns collapsed. Limestone is reflected in the milky color of the streams that flow through the landscape.

If you are looking for a quiet getaway in a peaceful setting, this is the spot. A few folks have Airbnb rentals, including Tamra Blackburn, who lives just outside the valley. In late September, we spent a lovely three-day weekend in her “Cabin at Little Creek” with a view of the backside of Garden Mountain. Barred owls and screech owls serenaded us at night before we drove into the valley to enjoy one of the darkest skies in the state. The Milky Way shone brightly across the 180-degree sky.

Amish families don’t use electricity and the 300 or so folks who live in the valley are scattered. There are no streetlights or stadiums to pollute the night sky with too much light, making it a perfect spot for amateur astronomers. 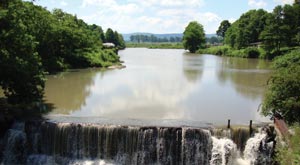 We visited Burke’s Garden for its annual Fall Festival, held the last Saturday in September, which attracts nearly 10,000 visitors to this corner of the state. More than 100 vendors sold crafts, art, and food, while local bands played country and bluegrass at the Burke’s Garden Community Center.

Sara White, who has organized the festival for the last two years, said she would like to see it grow even bigger. A native of Burke’s Garden, White said the festival, which just celebrated its 32nd year, used to have more local participants. “When I was little, everybody’s house had something set up,” she said. White would like to increase local participation again. Most of the vendors are from outside of the valley—from nearby hamlets or even West Virginia and North Carolina. Proceeds from the festival help pay for the bands and upkeep of the community center. 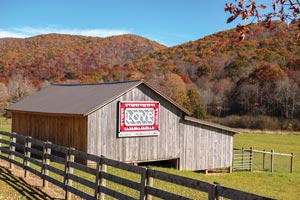 We enjoyed the festival, but we also liked the quieter day before, when we ate a buffet dinner at the General Store, run by an Amish family from Ohio. Skylights provided the primary light indoors as the sun sank behind the mountains, and chicken cooked in a smoker outside near the porch, where we ate. The store is full of jams, jellies, candies, and other items produced by Amish in Ohio, while the local, warm homemade bread melts in your mouth.

Mattie’s Place is the only other store and restaurant in Burke’s Garden, located off Gose Mill Road. Her selection of breads is even larger and her breakfasts and lunches are popular among locals and visitors alike. Bicycles are also available for rent at her store.

The Burke’s Garden Artisan Guild is a new arts cooperative that features handmade art of some 40 local artists including giant hex signs, colorful quilts, paintings, wood carvings, and other pieces. Many of the barns around the valley display hex signs.

The clearest symbol of Amish culture, however, is the horse and buggy, which serves as the primary means of propulsion for these people, who speak Pennsylvania German, also known as Pennsylvania Dutch. Schoolchildren use scooters to travel to and from their small schoolhouse in their traditional clothing. 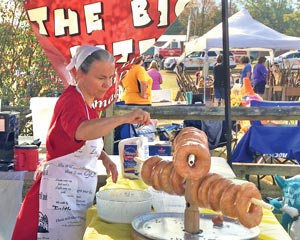 Long before their arrival, however, the area was occupied by varying cultures of indigenous peoples. Burke’s Garden was first surveyed by Europeans in 1748. One of the surveying party, James Burke, is said to have thrown away or planted some potato peelings while cooking around a campfire. A year later, when the party returned, they found a bumper crop of potatoes. The area was dubbed Burke’s Garden as something of a joke, but the name stuck.

In the late 19th century, agents for the Vanderbilt family tried to buy land for a large estate in Burke’s Garden. Nobody wanted to sell, and the Vanderbilts instead constructed their Biltmore Estate near Asheville, North Carolina. 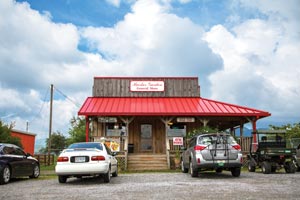 A National Historic District, Burke’s Garden boasts a Lutheran Church dating to 1871, along with its 180-year-old cemetery.

Burke’s Garden is a popular spot in October, when the mountains blaze with fall color. Winter can be harsh and almost impossible to get in and out during snowstorms. It’s often 10 degrees cooler in this high valley than in the lower ones nearby, which can make it a lovely place to visit in the spring or summer as well.

Bird watchers will find spring and fall migrants as well as year-round residents, including bald eagles.

Whether you come to birdwatch, hike, bike, stargaze, or visit the Fall Festival, Burke’s Garden is a quiet retreat to a slower pace of life, where it’s perfectly acceptable to do nothing at all.