Just uphill from the entrance to the Wintergreen Resort, a tiny German village awaits visitors who want an old-world experience.

From many of the rooms, visitors can gaze upon wild turkey or perhaps even a bear. Although this hidden getaway has been open less than two years, visitors from around the world have discovered it, including a Buddhist nun from Taiwan and tourists from South Africa.

What’s most impressive about this inn, however, is the amount of labor that Will and Lilia Fenton invested during the four years it took to build. “There were only four hours with a crane on the whole job,” said Will, noting that he had only two younger helpers to do all the other heavy lifting. Just one set of windows weighed 300 pounds.

A woodworker by trade, it’s fair to call Will more than an amateur architect. He designed the entire project and visitors are hard pressed to find many 90-degree angles. 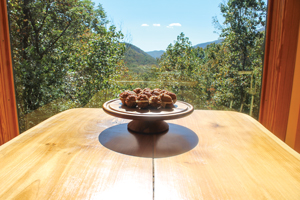 “I’ve got my octagons down now,” he said.

While much of the inspiration for the inn came from visits to Europe, Will also drew ideas from his past work at Monticello, Poplar Forest and Colonial Williamsburg.

All the wood in the inn was cut and milled on site. Even the smallest pieces were preserved for use in Will’s sometimes whimsical creations.

The rooms offer lovely views of the Three Ridges, a popular 10-mile Appalachian Trail hike from Reeds Gap on the Blue Ridge Parkway to the Tye River on U.S. 60. In one room, the Swallow’s Nest, guests can even see the view from a large windowed shower.

Will is building a new cabin that will be pet-friendly and distinctly separate from the other guest rooms.

A meeting space is designed for a small wedding with up to 10 guests or an intimate place for any special gathering.

Lilia, a native of Crimea, helps run the inn and prepare the breakfasts—which include homemade granola with berries and yogurt—that are not to be missed. French toast, Belgian waffles, omelets and sausage are common menu items served in the bakery, which also provides stunning mountain views.

Lilia and Will met in Crimea, where Will had gone for architectural inspiration. Crimeans, he said, have a flag of every nation that has ever conquered them so they can raise the right flag when the next invader comes, which seems to happen every 50 years or so.

Most recently, Russian President Vladimir Putin made headlines when he annexed Crimea away from the Ukraine in 2014, provoking international outcry. Lilia says it is now too dangerous to return home.

Lilia has no need to leave Nelson County, however. She and Will love the quiet spot on their mountainside.

Lilia grew up on the Black Sea coast. Her father was a doctor, and they lived in a castle-like home in a summer beach town. She attended medical school and received her doctor degree in medicine.

Will grew up near Albany, New York, and spent summers hiking in the Adirondack Mountains. He graduated from the University of Arizona after studying architecture and finance. Returning to New York, he studied historic restoration and worked on some notable Dutch homes in the Hudson Valley. Following his passion for history, he moved to Virginia to work at Monticello.

From there he was recruited to Thomas Jefferson’s summer home, Poplar Forest, where he helped with the complete rebuild, guided by Jefferson’s original letters. Will worked at many other museums, including Robert E. Lee’s birthplace, Stratford Hall, and Yorktown.

Ever drawn to the mountains, Will spent his time off biking the Blue Ridge Parkway or hiking along the Appalachian Trail. His favorite day hike was Three Ridges. One day he noticed land for sale with a view of his favorite mountain. He bought it, built a house, and later, the Fenton Inn.

The inn and village are truly a labor of love. After settling into a guest room, visitors can step onto the cobblestone streets and be transported back to medieval Germany. The village has a town square, clock tower, bakery, theater, gym, spa and gift shop.

The various braces and figures on the buildings each have historical meanings, like the Grudger head protecting from evil and envy. Inside the lobby, oak timbers soar in a full arch inspired by a medieval English church.

Near the entrance to the lobby is “the longest drawbridge in Nelson County,” though it wouldn’t keep out invaders.

Just down the hillside is a beautifully landscaped terrace with a hot tub, perfect for stargazing on a clear night.

Because breakfast is the only meal served, guests will likely want to leave the inn in search of lunch and dinner at nearby Wintergreen Resort, Devil’s Backbone Brewing Co. or one of several other restaurants, breweries, wineries and cideries back down the mountain off Virginia 151.

Multiple opportunities abound for hiking and bird watching, golf, and in the winter, skiing at Wintergreen.

Lilia said they stay booked on weekends, and weekdays are more likely to be free. During an early summer visit, my partner and I shared the inn with three bikers from Michigan who were on their way to a Vespa convention in Richmond.

The Internet creates interesting combinations of visitors. Will said he has been most amazed to have guests from Mozambique and most surprised that no Australians have found them yet. That probably won’t take long.

In a very short time, visitors can see how much work went into every detail of the inn and village. Will has a simple explanation for the effort.

“I had a European wife and had to make a suitable habitat,” he said.