Lynchburg Living Editor Shelley Basinger: Norman, take me back to how this hobby of yours began. Have you always had an interest in woodworking? 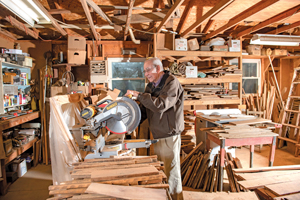 Norman Ogden: When I was in school, we had FFA (Future Farmers of America) and the last semester we had to work in the shop. You had to make a toolbox by hand using a handsaw and all of that.

SB: Did that spark an interest for you?

NO: It did. But after school I went and worked for a long time. When I left school, I worked at Campbell-Payne Inc. hauling and unloading cement by hand. Then I went to work at the paper mill (formerly MeadWestvaco Corp., now WestRock Co.). I worked for 46 years until I retired in 1998. That’s when I said to myself, “Well I’ve got to have something to do.” In the meantime, I had bought a truckload of tobacco sticks. I decided I was going to try to make something out of those. So I did.

Bonnie Kinnaird (daughter): The first tobacco sticks he used came from an auction and at first, Dad didn’t know what he was going to do with them. It was just part of the heritage of Virginia. He wanted them for that reason. 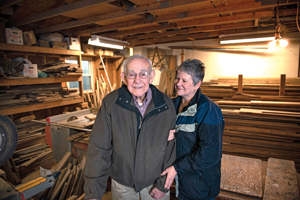 SB: A lot of people (including me) may not really know much about tobacco sticks. What’s the history there?

NO: They don’t use them much now. But farmers used to take all of the leaves off the tobacco and tie them onto the sticks. Then the sticks were hung in the rafters of the barn. They would put a fire underneath to dry out the leaves and prevent mold. After the tobacco dried they would take it down, tie the leaves into bundles and take the tobacco to market. They quit using the tobacco sticks mostly or some farmers quit raising tobacco altogether. Then they had these piles and piles of tobacco sticks leftover.

BK: The first thing he made with the tobacco sticks was a little stand or drying rack that would sit on a counter, about 18 inches long. This was in the heyday of country style. People used it to display towels in their bathrooms, for example. That drying rack was the beginning of it all. Little boxes came next.

NO: Bonnie said to me one day, “Now that you’ve made all of these things, what are you going to do with them?” I thought maybe I could just give them away. But we went to some craft shows and I later ended up selling at the Lynchburg Community Market.

SB: You’ve worked up to bigger pieces of furniture now. What inspires you to create? 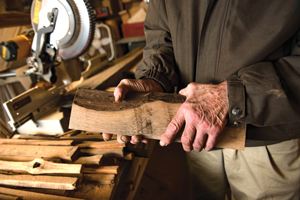 NO: Sometimes when you start out you have a big idea. Then you get into it and it has to be changed (laughs). I make coffee tables, shelves, cupboards with tobacco stick doors, dining tables, all kinds of things.

SB: With so much interest in farmhouse style, I’m sure you’re seeing a lot of customers.

BK: Up until really the last year, we were able to find reclaimed lumber at auctions or other ways but now that it’s so popular you either can’t find it or you can’t find it for an affordable price. A lot of what Dad is doing right now is making with what he has.

NO: Everybody wants a farmhouse table. Of course, they have to have a certain size… and a certain look.

SB: Where do you do most of your work?

NO: I have a garage out back. I thought when we moved here a few years ago it had a lot of space. But it keeps getting cluttered up… and smaller and smaller. 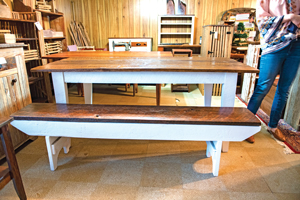 NO: Every single day.

BK: That’s how you get to be 87. Doing something you love.

SB: Any final thoughts you want to pass along?

NO: I’m lucky to have all of my fingers. That’s the main thing. I think sometimes when I’m working with the table saw…it would be terrible after all of these years for me to lose a finger!

Find Norman’s wood furniture and décor at the Lynchburg Community Market and keep up with him on Facebook: Norman Ogden, artisan.