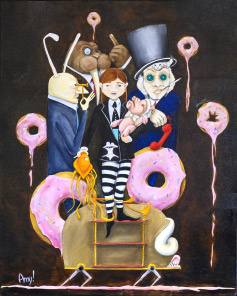 Lynchburg Living Editor Shelley Basinger: Amy, we’ve been hearing a lot about you as an artist. Some even calling you a “visionary”! How would you describe your artwork?
Amy Burczyk: It’s a juxtaposition between child-like presentation and serious subject matter. There is a use of color and characters that’s easy to relate to. I’ve also been called an illustrator—and I’m fine with that. I just paint my interpretation of stories or the stories that pop into my head. I just let my imagination run without all the constraints of being an adult all the time.

SB: Can you give us one example?
AB: “Time to Make the Donuts” is the story of working women in a man’s world. She does it all—raises the kids and brings home the bacon, both represented by the pig. The squid represents her ability to multitask in a dog-eat-dog world. She does not climb the ladder, but steps down—does she recognize the need for balance? Those around her express disdain, incredulity and a patronizing superiority, while her demeanor is unmoved by them.

SB: Where did you get the idea to approach artwork in this way?
AB: It was less of an idea than it was a reaction to a phase of my life and what I was going through about 8 years ago. My kids were grown, my marriage was over and I found myself in Virginia. It was a complete 180 from what I had known. It was scary; I felt very alone. But, at the same time, it was very freeing. There was no one else that I had to please and I had a lot of time for reflection. My meltdown came while unpacking. I found my antique copy of Alice’s Adventures in Wonderland and it was ruined! I had always liked art as a child so I painted my first work in Virginia, “Cheshire Cat.” It opened up a whole new world for me and was so much cheaper than therapy.

SB: At what point did you realize you were doing more than just healing… but were able to sell your work?
AB: I stopped in to a little cafe in South Boston—Southern Plenty, owned and operated by Mary Bagwell who is an amazing artist and chef—and she was selling some local artists’ work out of the cafe.
I showed her a picture of a couple of my pieces and asked her if she would consider selling mine. She said NO. Instead, she sent me to the Prizery where Chris Jones offered me my first show here in Virginia! Thank you Mary and Chris! 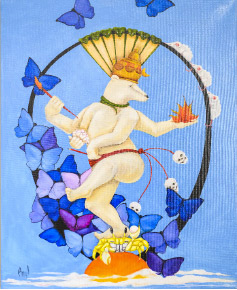 SB: It’s so awesome to look back on the people who helped us get to where we are. How are you involved in the Lynchburg art community now?
AB: I become a member of the Lynchburg Art Club two years ago. There are so many talented members; I was really rather intimidated to join the club with all that talent! But they were so receptive to my work, even though it was very different from theirs. I won an award at a juried show and their response was, “Let’s give you a show.” I’ve had a few exhibits at private businesses and the Lynchburg Humane Society, but it wasn’t until I joined the Lynchburg Art Club that I received any real notice here in Lynchburg. I was also given the opportunity to do a pop-up show at Riverviews Art Space—Kim, Meg and Stephen have really made Riverviews a special place!

SB: Are you working on anything special right now?
AB: I’ll be exhibiting at Magnolia Foods and Flint Realty in March through the Academy Center of the Arts. I’m working on my own Tarot deck—just the Major Arcana (22 pieces). I also have a wedding portrait commission I’m working on. The groom is a polar bear and the guests are birds—ageless. I love these kinds of commissions! And of course, other stories that pop into my head. 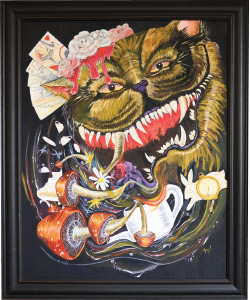 SB: And we have to mention—you are doing all of this on the weekends!
AB: Sunday Fundays are spent painting. During the week, I’m a designer at LG Flint Construction, which creates a nice balance for me. The sense of composition, rhythm, color and discipline translate across design and painting. I love my design work. My creative side helps me address design issues with my tendency to use my “what if” in a functional way. The people at LG Flint are fantastic to work with and our clients are amazing! I’m not going to lie though—if I won a big lottery, I might paint all the time!

SB: What’s the best advice you’ve ever received that’s helped you as an artist?
AB: Ken Ludlow, my high school art instructor, was the best! And the most relentless. Observe, line weight, see, thumbnails, look, rules, sketch, look again, more lines… and on and on to the point where I feel like my hands can SEE what pictures are in my head.

SB: What’s your best advice to aspiring artists?
AB: 1) “Arting” should be a word, and you should do it as often as you can. 2) Do the art YOU like. It is much easier and more rewarding. 3) Exhibit—call it group therapy. It helps you stretch and grow as an artist.