DOLLY PARTON’S IMAGINATION LIBRARY WILL EXPAND IN LYNCHBURG THIS YEAR 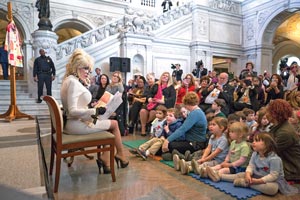 The Dolly Parton Imagination Library, an international initiative that sends free books to children from birth to age five, is extending its reach to additional Lynchburg-area zip codes this year. Local education-focused nonprofit The Aspire Foundation began partnering with DPIL last fall and has since signed up many families who reside in the 24501 and 24504 zip codes.

“When we started the program last September, we didn’t know how fundraising was going to go,” says Aspire Foundation co-founder Mary Omotoye. “We decided to start the program in 24501 and 24504 because according to the U.S. Census Bureau, those are the most socioeconomically challenged areas in Lynchburg. We are happy to announce that we now have enough funding to open the program up to 24502 and 24503 as well in 2020!” Grants from the Schewel Family Foundation, Centra Foundation, Greater Lynchburg Community Foundation, and Mustaches 4 Kids increased DPIL funding significantly.

Omotoye first learned about DPIL when she and her family lived in Cleveland, Ohio. She and her husband, Samuel, enrolled their two young sons in the program and received free books for about half a year. When the family moved to Lynchburg, however, they discovered that DPIL was not available. For the Omotoyes, this absence proved to be an exciting opportunity rather than a disappointment. 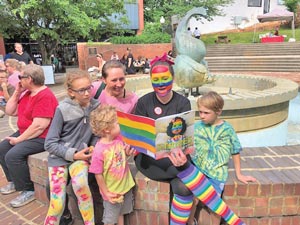 “I checked the Imagination Library website and found out that in order to be an affiliate of the program, you have to be a nonprofit organization,” Omotoye notes. “I talked to my husband about it and we thought, ‘Why don’t we start a nonprofit?’ We always had it in mind that we eventually wanted to do nonprofit work in the education sphere, so we thought this initiative was a great place to start.” The couple founded the Aspire Foundation in 2018.

Rox Cruz, a local mom and Freedom Schools Site Coordinator for The Listening, Inc., was one of the many parents who was excited about DPIL coming to Lynchburg.

“I am a major Dolly Parton fan, so I’ve known about this program for over 10 years,” Cruz says. “Once I had my first son, I wanted to sign him up for the program right away. We were living in Florida at the time, but unfortunately our zip code was not eligible for the program. I was so stoked to find out we were eligible in Lynchburg!”

Beloved country music artist Dolly Parton founded DPIL in 1995, and the program has since expanded beyond Dolly’s home state of Tennessee to all 50 states and to Canada, the United Kingdom, Australia, and Ireland. Childhood literacy is a passion of Parton’s largely due to her own upbringing.

“Dolly Parton’s father was illiterate, and she grew up very poor. Her mission is to provide books for all children, no matter their family’s income,” said Omotoye, who also experienced a humble childhood. “My husband and I are immigrants and didn’t have a lot growing up, but good educations and a love of books and learning helped us find success—I’m a pharmacist and my husband is a physician.” 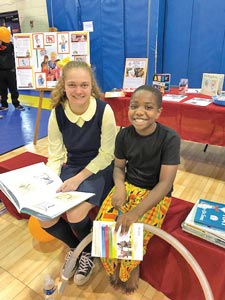 Enrolled children between ages birth and five receive one free, high-quality book each month until they turn six. The books are selected by an expert panel and come from reputable publisher Penguin Random House. Titles are age-appropriate, at least two bilingual titles are sent to each child each year, and DPIL’s partnership with the Braille Institute of America ensures that blind and visually impaired children receive Braille books.

Cruz, whose sons are one-and-a-half and four, is especially grateful for the addition of bilingual books to their home library.

“My husband is Puerto Rican, so it is really meaningful to us that this program occasionally sends out bilingual books,” she says. “I was so excited when my four-year-old received A Snowy Day by Ezra Jack Keats in English and Spanish last month.”

Although DPIL is beneficial for all children in the targeted age range, it is ideal to enroll a child at birth.

“What’s special about this program is that it really starts from birth,” says Omotoye. “We’re really trying to target that age group before kindergarten because there are tons of studies that show that just having books in the home early on in a child’s life—before the child is even talking—is incredibly impactful on brain development and reading readiness.”

Of course, reading to your child is even more beneficial than simply having books in your home. “For parents, the DPIL books are a reminder to be more intentional about sitting down and reading with your children,” Cruz says.

Omotoye adds that DPIL has a “large impact with a relatively low financial input.” It costs $25 per child per year, which comes out to $2.10 per book including shipping costs.

With the upcoming inclusion of additional Lynchburg zip codes, the Aspire Foundation will be focusing on registering new families for DPIL in 2020. Existing partnerships with Miriam’s House, Johnson Health Center, Richeson Drive Pediatrics, the Jubilee Community Center, and Lynchburg City Schools (specifically the Pre-K Headstart program) will continue to raise awareness of and participation in the program, and Omotoye hopes to work with even more community partners this year. 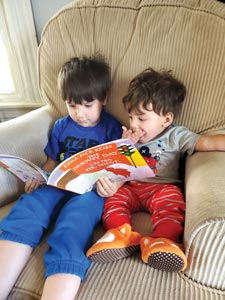 “To register as many children as possible, we want to partner with places that provide services and programs for children,” she says. “We have many wonderful community partners already and are hoping to partner with One Community, One Voice and other organizations in the near future.”

Cruz highly recommends enrolling in the program as a supplement to taking your children to the library.

“We love taking our kids to the library, but this program brings free books to us when we’re too busy to go out or it’s flu season and we don’t want to risk our kids getting sick,” she notes.

Although the long-term benefits of DPIL, libraries, and reading books in general may be lost on little ones, the joy of receiving a free and personalized gift in the mail applies to folks of all ages.

“For kids, it’s simply a gift that they get in the mail,” Cruz says. “There’s a kind of magic in receiving snail mail, especially when you’re receiving something wrapped up with your name on it. My four-year-old thinks Grandma Dolly sends him the books personally!”

To check your family’s eligibility for DPIL, visit aspirefound.org. Although it is possible to register online, Omotoye recommends doing a written registration form at this time. To learn more about DPIL, visit imaginationlibrary.com.