While new storefronts are consistently opening, it’s the addition of several murals and public art that are really starting to steal the show. With the completion of the roundabout and city beautification efforts along the NW corridor (the stretch from Federal to Main), new businesses, eateries, coffee shops and even a health center have moved in over the course of the last few years. And along with their presence, many business owners are working to improve the aesthetics of the street as well.

“I want people to be looking up to the projects we have done and be inspired to do their own,” says Jason Arbusto, owner and chef of Daughters and Sons Pizza. Located on the corner of 5th and Madison, Arbusto’s shop had an older mural on its outside facing wall, but he wanted to “add something new and fresh to the neighborhood.”

Fortunately for Arbusto, it was his pizza that helped bring the mural to life. He envisioned a “vintage postcard…retro and iconic [that]could stand the test of time,” but needed an artist to “expand it and make it his own” and is also “someone who loves Lynchburg.” Then, one day, Arnulfo Jacinto and his wife Alisa came in to have some food, and in Arbusto’s words, they had “a special connection from the first conversation, and the project took wings from there.” 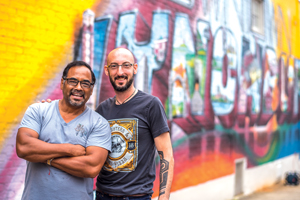 Jacinto (featured in the March/April 2018 issue of Lynchburg Living) says he immediately caught Arbusto’s vision of the “vintage postcard look” but also saw obstacles with the selected wall’s two windows; reconfiguring the layout made it possible to accommodate them into the spelling of “Downtown” by using each window to form the “Os” and still left plenty of room to sketch in the larger and more elaborate spelling of “Lynchburg” with block letters.

“We worked back and forth,” Arbusto says. “Tweaking the design and making modifications, but [Jacinto] had a lot of creative license…the process is the most fun part of it all, and we both love to collaborate.”

Into each of those block letters spelling “Lynchburg,” they wanted to incorporate icons of Lynchburg both past and present since the original post card that inspired Arbusto’s idea was from the 1940s and, as Jacinto says, “didn’t have any of the contemporary landmarks of today.”

Jacinto’s wife, Alisa, who has helped throughout the project, thought to ask a local Facebook group for their ideas on what to include and suggestions poured in. Jacinto says they incorporated most of them, which means the community members had key input. From the familiar—Monument Terrace, the Lynchburg Community Market, Point of Honor—to the newer— Amazement Square, Mama Crockett’s, the LOVE sign greeting visitors at Percival’s Island—the finished project is a distinctively Lynchburg mural.

“Public art is a reflection or our society; it tells us where we have been, who we are, and where we may be going,” Jacinto says. “Art is the window to our culture and heritage.”

“The fruits of our labor are now paying off,” Arbusto says of the revitalization occurring on 5th Street. “The whole block where we are [Madison to Clay Street] has been developed, where as six months ago, there was nothing.” He dreams of the neighborhood “being riddled with street art everywhere,” creating a street that’s a “nice place to live and enjoy visually” while also becoming a dining and shopping destination similar to historic Scott’s Addition in Richmond. 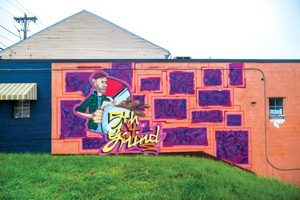 Fortunately, other business owners are already coming along on both ends of the corridor. At the northeast corner of 5th and Federal, a mural of a caffeinated coffee drinker faces the traffic circle, beckoning them to join at 5th St. Grind.

“It represents the spirit of the shop,” says barista Joshua Sosin of the coffee shop that opened in the fall of 2017. “It’s cheerful, colorful, quirky.” Completed by artist Austin Santos in late August, Sosin says it seems like the “perfect fit since the shop is very art-forward.”

Grey’s, a new eatery closer to Main Street, had a mural of local legend and former astronaut Leland Melvin commissioned for a large inside wall. The image is a modern take on one of his official portraits for NASA, which is also the cover of his book Chasing Space. The image went viral a few years ago due to the rare and endearing inclusion of Melvin’s two rescue dogs.

And, on the corner of 5th and Court, Elise and Adam Spontarelli are working to make art part of the culture at Vector Space, a nonprofit makerspace and community workshop they co-founded in 2016.

“We are excited about the future of 5th Street,” Elise says, noting the “tremendous growth” of the corridor thus far. “Public art lets the neighborhood and the community know that people care about the area [because]art is inviting and a sign of life.”

Vector Space has an outdoor piece by Bartertown Bobby Fuller on the wall facing Court Street and Adam did a piece on the adjacent outside wall. After renovating the second floor of the building, Elise says Jacinto and Nugent Koscielny are both working on interior pieces to bring “color and visual interest to the space.” 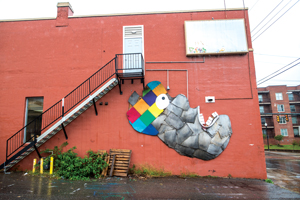 Jacinto says Vector Space “promotes an amalgamation of art, machinery, and robotics” which has led to him focusing on the expansion of his “Rollerbot world,” a creative endeavor that really kicked off during the “Art on Main” event in 2017. Now, Jacinto has plans to include underwater and outerspace elements as he continues to develop the Rollerbots.

Elise says the art is a result of collaborative effort similar to Arbusto’s mural; “we are pretty open to the [artist’s] vision,” she says. “As a community space, we want to reflect the members of our community.”

Another element Arbusto and Jacinto both mentioned, in addition to more murals, is the possibility of sculptures and statues, one of which is currently in the works for the 5th and Federal traffic circle.

“I can imagine 5th Street being on the ‘go to’ list for tourists, locals and visitors to see all of the culture here,” Arbusto said.

Start at the corner of 5th and Federal, facing NW towards Main Street
• 5th St. Grind / coffee drinker
• Daughters and Sons Pizza / Greetings from Lynchburg
• Grey’s / Leland Melvin portrait (inside)
• Vector Space / multiple murals both inside and out

Some of the icons in the Daughters and Sons Mural facing Madison Street include: