Trending
By Suzanne Ramsey on July 1, 2019 This City

In the decades before the American Revolution, New London, Virginia, was what 19th-century historian Henry Howe described as “a place of considerable importance.”

Then the county seat of Bedford County, New London boasted 70 to 80 homes, an arsenal and a magazine. There also was a court house, pictured in Howe’s book, Historical Collections of Virginia, as a rectangular wooden structure surrounded by a simple fence.

Across the road from the court house, on the present-day corner of Alum Springs and Town Fork roads, was Mead’s Tavern. It was built in 1763 for Col.

Mead, who lived on a nearby plantation called Royal Forest, owned the tavern for 20 to 25 years, but never personally operated it. He and his family later moved to Georgia, where he died in 1805. The tavern that bears his name still stands, although it has traded hands and uses numerous times since then.

“[It’s] a remarkable survival from the colonial backcountry,” Dan Pezzoni, an architectural historian who’s been studying the tavern, said. “Historical, architectural and archaeological analysis is revealing and has the potential to reveal a wealth of information about everyday life in 18th-century New London, one of western Virginia’s most important colonial and early national communities.”

In the mid-18th century, the two-story, Georgian tavern would have been an unusual sight in what was then wilderness. “We take two-story buildings for granted today, but in the colonial backcountry, they were a rarity,” Pezzoni said.

“Even in Williamsburg, the colonial capital, many taverns were only a story and a half. William Mead’s business partner …
wasn’t exaggerating when he described the tavern as ‘a very Magnificent [sic]house.’”

The Mead’s Tavern research is sponsored by Liberty University. Liberty bought the tavern in 2015 and later purchased the Alum Springs Hotel, a 19th-century resort named for the nearby alum springs. The hotel, which sits a stone’s throw from the tavern, is thought to be on the site of the aforementioned arsenal.

Keith Adams, director of Hurt & Proffitt’s Archaeology and Material Conservation Labs, also is working on the project. He said the tavern could be the “oldest, still-standing structure in the region” and with its close proximity to the court house it “saw many events and people over the years.”

Numerous historic figures made appearances in New London, which sat along a popular route between the East Coast and the frontier. Various accounts provide a “who’s who” list of early visitors, among them Thomas Jefferson, Patrick Henry, Daniel Boone and George Rogers Clark.

Gen. Andrew Jackson, eventual seventh president, passed through in 1816, fresh off his victory at the Battle of New Orleans. According to “The Papers of Andrew Jackson: 1816-1820,” he and his family were en route from Washington, D.C., to their home in Nashville, Tennessee.

While at a tavern in New London—which tavern isn’t stated—Jackson was allegedly challenged to a duel by a local youth. A passage from “New London Today and Yesterday,” by local historian and educator Daisy I. Read, tells the story this way: Jackson was drinking hard cider with Col. Alexander Austin, a friend in New London, when they were approached by “Long Bill” Callaway who, as Read puts it, “had already had more than his share of cider.”

Callaway started an argument with “Old Hickory” and “made a remark to which the general took exception and was immediately challenged to a duel,” Read writes. “Knowing Jackson to be a sure shot, entirely sobered by this time, the young man spent a sleepless night; and it was only through the intervention of the youth’s father the facts were made known, the proper apologies were made by young Callaway and the duel called off. But there was a scared young Callaway!”

Donna Donald, history professor at Liberty and secretary for the Friends of New London, a nonprofit that works to preserve the town’s historic structures and share its history, didn’t dispute the entertainment value of the story. She did, however, question its veracity.

“The Andrew Jackson story might be just that,’ she said.

While Donald and others might question the stories that were passed down, there’s no denying the evidence left behind at the tavern. Artifacts discovered thus far have included, among other things, smoking pipes, ceramics, glassware, buttons, pins, thimbles, keys and gaming pieces.

Many items were found at the site of the tavern’s original front porch. Randy Lichtenberger, an archaeologist with Hurt & Proffitt, said a “dense deposit of artifacts”—he called it a “midden”—was found there beneath six inches of dirt.

Asked about the most exciting discoveries they’d made at Mead’s Tavern, his colleague Adams said, “I know most people think of objects as exciting, but as far as excitement, the idea of discovery, no matter what is being uncovered, is exciting to me.

“Finding archaeological evidence for the early 18th-century porch, after many weeks of carefully removing all the layers of 21st-, 20th- and late-19th-century debris that accumulated over roughly 250 years—that’s exciting.” 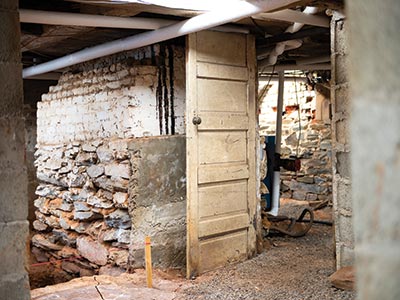 Adams added that the “historical sequence of porch configurations being revealed through the porch project will add greatly to our knowledge of the evolution of the structure as it changed over time to fit each new use.”

The focus of Liberty’s investment in New London is providing educational opportunities for its students. “President [Jerry] Falwell is really interested in history and he wants to have hands-on experience for our students,” Roger Schultz, dean of Liberty’s College of Arts and Sciences, said. “He seemed passionate about the potential for our history students.”

Students have assisted the architects and archaeologists at Mead’s Tavern as part of classes in public history, historic preservation and digital history.

Rachel Gilbert, who graduated from Liberty in May with a Master of Arts in Teaching degree, worked on the project for Introduction to Public History, a class she took for her undergraduate degree in Secondary Education-Social Studies.

In addition to compiling a “Chronology of New London” for the Friends of New London website, Gilbert worked as a tour guide for New London Day,
a fall festival that celebrates the history of New London. Last year’s event drew about 1,200 people. (See sidebar below for event information.)

“We gave tours of Mead’s Tavern all day, describing the historic uses of the building over its 250 years and how we know some of those things, based on records, archaeological finds and structural clues,” she said. “We had an amazing turnout.”

Schultz recalled one instance where a student found a piece of flintlock rifle.

“He was grinning ear to ear,” Schultz said. “He lit up; he was so excited.

The archaeologists working with us, they really enjoy working with the students. … It’s so interesting. The students just love it, especially when you have specialists who are so knowledgeable about what they’re doing.”

Suzanne Ramsey is a freelance writer who also works part time in the communications and marketing office at University of Lynchburg. She enjoys historical research, running, traveling, and hanging out with her husband, John, and cats, Hector and Edna.